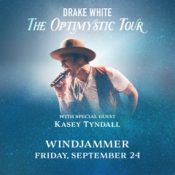 If for any reason this show needs to be moved in doors…Only the first 400 tickets will be valid for entry…Out door only tickets will be marked before purchase and automatically refunded to the Credit Card used to purchase!

To listen to Drake White’s music is to fully experience the soul and rhythm of his upbringing in the Appalachian foothills of Northeastern Alabama. The undeniable sound of his soulful voice has whipped concert audiences across the country into a frenzy as Drake and his band, The Big Fire, raise the roof and summon spirits to life onstage. It’s equal parts Baptist tent revival and amped-up southern rock festival. As you watch Drake crank the energy level up higher and higher throughout the night, you feel as if you’d walked in on a live gospel album backed up by all-stars from The Allman Brothers and Lynyrd Skynyrd. Of course those acts hit musical pay dirt recording in Muscle Shoals, Alabama in the late ‘60s and ‘70s, a little over two hours west of Drake’s tiny hometown of Hokes Bluff.

The same fire that drives Drake to pour his entire being in to those performances also demands that he continue exploring and refining that country soul sound, which the world first heard on his debut album, 2016’s SPARK (Big Machine Label Group). In the spirit of propelling his music forward, Drake teamed up with a crew of Nashville’s most creative musicians in an effort to, as he says, “Bridge that gap between Nashville and Muscle Shoals.” It’s in the crossroads of those two musical worlds that you’ll find Drake White’s new five-song EP, PIECES (BMLG Records) . The new project is helmed by hit producer busbee, best known in country circles for his work with Maren Morris and Keith Urban.

Coming from a pop and jazz background, busbee challenged Drake to dig in deep in the studio and explore the nuances that come to light when the singer uses his all-consuming vocal power a bit more sparingly. “Some songs just call for a barn-burning vocal,” Drake says, “but it’s about knowing when to pour into that vocal and when to back off it. Those are things that hours and hours in front of a mic in the studio have molded in me, and I’m very thankful for that.” It’s a move that pays off handsomely as you hear Drake easing into the laid back feel of the opening track, “Girl in Pieces.” The tropical vibe is inspired by Drake’s love for Bob Marley’s music, but the song’s message hits a bit closer to Drake’s Alabama hometown. Drake and his wife, Alex, first started dating after she’d been through a bad romance. They’d known each other for awhile, and Drake saw firsthand how that relationship just left her in pieces. He stepped in and was there to help mend her broken heart.

It’s exactly the story that plays out in “Girl in Pieces,” which floored Drake since he didn’t write this one. He says, “There’s even a line in the song, ‘The green in your eyes is all over the floor,’ and Alex has green eyes. It is my story, and I think it’s a message a lot of people need to hear to get out of a negative situation. Everybody needs that friend to kick ‘em in the butt and say, ‘Hey, you only live once.’” The influence of Alex’s love and the ever-present pull of Drake’s home state are felt strongly throughout the five-song project. You’ll want to listen closely to catch the poetry he employs to weave the vivid and sexy stories of a man and woman going “slow dancing in the darkness on this blanket made of stars” on “The Best Is Yet to Come” and then finding something to do while killing time “where the world is greener” on “Grandpa’s Farm.” Then there’s the slow burn of “Nothing Good Happens After Midnight,” which finds Drake finally unleashing his full vocal power while singing these sultry lyrics: “I take your hand and we dance down the hall/To the rhythm of our own love song.” You’ll find those lyrical sparks sprinkled throughout PIECES, and they really connect you straight to Drake’s heart and history as a son of the South steeped in the timeless works of William Faulkner and Mark Twain. Drake says, “I love writing that’s very simple, but it’s like, ‘Oh, I know exactly what you’re talking about.’ I’m infatuated with words and trying to arrange them in a way that would make my heroes proud and that would make Alabama proud and make that geographical location where I learned how to read and write make sense.” While Drake is committed to remembering and honoring his roots, he’s also keeping a clear eye on the future. That’s especially true as it relates to his relationship with his fans and his music. Packed in the lyrics of the project’s closing song, “The Best is Yet to Come,” you’ll find a clear statement of Drake’s belief that all the work he’s putting into connecting with fans and perfecting his musical craft is leading to something really big. It’s all captured in the line, “Trying to stay lost in the moment while we know it’s flying past/We’re just getting started/It’s gonna be a long, long run.” “I do this because it makes me happy,” Drake explains. “I have a great life. I have a great band, and we’re going to be doing this the rest of our lives. I feel it.”