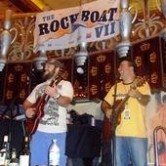 Tickets are $5 at the door…Doors 9PM

The Francisco Vidal Band, an acoustic, rock/pop power trio, hails from Atlanta and will light your rock and roll fire. Fronted by Atlanta guitarist/singer/songwriter Francisco Vidal, FVB fills venues with loyal fans–old and new. He fuses virtuosic skill and poise on guitar, with strong, memorable vocals and tireless enthusiasm for live performance. His unique brand of feel-good rock will have you singing along with him at the top of your lungs.

Francisco has played on more than a dozen Sixthman music cruises, like The Rock Boat, Simple Man Cruise and Mayercraft Carrier. He has performed alongside national acts such as Zac Brown Band, Marshall Tucker Band, Edwin McCain, John Mayer, Sister Hazel and many other renowned artists. He has also headlined at festivals and major venues from Panama City, to Minneapolis, to Los Angeles. Francisco is on a heavy hitting tour schedule, playing 350 shows a year across the country.