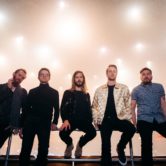 http://ridethemoontaxi.com
Since forming in 2006, Moon Taxi have brought their genre-bending musicality to a boldly adventurous body of work, all while taking their live show to leading festivals across the country and sold-out runs at such iconic venues as the Ryman Auditorium. In a dynamic new era for the Nashville-based band—vocalist/guitarist Trevor Terndrup, lead guitarist Spencer Thomson, bassist Tommy Putnam, keyboardist Wes Bailey, and drummer Tyler Ritter—their fifth full-length Silver Dream broadens their sonic palette even further, exploring everything from folk to soul to inventively crafted electronic pop. But while the album embodies an endlessly forward-thinking sound, its lyrics offer a thoughtful reflection on days gone by.
“A lot of these songs came from bringing up moments from the past and recognizing how those memories, especially the good ones, have a sort of soft shine to them,” says Terndrup. “The title is our way of asking, ‘Was it really as beautiful as you remember?’” As Thomson notes, the sweetly hazy reminiscence documented on Silver Dream involved tapping into something of a collective memory. “We’ve been making music together for such a long time that we’ve all seen each other go through major life changes,” he says. “Because of that, the moments that found their way into the lyrics are often experiences that we all lived through together.”
The follow-up to Let the Record Play—a 2018 release that featured the chart-topping single “Two High” and earned praise outlets like from Rolling Stone and NPR—Silver Dream finds the band opening themselves up to collaboration more than ever before. To that end, Moon Taxi joined forces with songwriter/producers like Chris Seefried (Fitz and the Tantrums, The Kooks), Christian Medice (lovelytheband, Halsey), and the late Busbee (The Head and the Heart, Maren Morris), recording partly at the legendary Blackbird Studio in Nashville. At the same time, the band made much of the album entirely on their own, with Thomson maintaining his longtime role as producer and spearheading the free-flowing experimentation that shaped Silver Dream.
Working mainly at Thomson’s home studio, Moon Taxi brought Silver Dream to life by fearlessly following their intuition, embracing total spontaneity in every element of the album-making process. “The line was kind of blurred between the writing and production, where we were doing both in the same moment,” says Terndrup. Thomson adds: “Working that way really helped us not to overthink anything—whatever was our first instinct, we just rolled with that and kept building on it, and most of the time it took us into some exciting directions.”
Co-produced by Thomson and Medice, Silver Dream’s anthemic lead single “Hometown Heroes” shows the wisdom of that approach. As Thomson points out, the song was sparked from a hook that Terndrup stumbled upon while playing a mandolin/guitar hybrid late one night at Medice’s studio. “We’d been writing and recording all day and felt a little delirious, but Trevor got that hook and we held onto it,” he says. Several months later, backstage at Summerfest in Milwaukee, Moon Taxi began improvising lyrics based off a song title Putnam had suggested years before. “Tommy and I started playing together when we were 15, so we definitely got nostalgic bringing up those memories—there was a lot of funny-slash-stupid stuff about hot-boxing cars and N64s,” says Terndrup. As they completed “Hometown Heroes”—a wistful but brightly textured and immediately catchy track—Moon Taxi captured a far more universal sentiment, thereby allowing the listener to project their own recollections onto each lyric.
A particularly meaningful song for Moon Taxi, “Take the Edge Off” was co-written with Busbee not long before his diagnosis of brain cancer. With its potent back-and-forth between stripped-back verse and shimmering chorus, “Take the Edge Off” unfolds with an unguarded honesty that the band partly credits to Busbee’s influence. “Initially I had this idea of making a fun drinking song, and Busbee took that idea and helped us to get to the core of it,” says Terndrup. Driven by a nuanced but powerful vocal performance, “Take the Edge Off” evolved into a soul-stirring meditation on the need for connection in times of deep struggle. “Working with Busbee made a huge impression on us, as far as bringing real emotional truth to our songs,” says Thomson.
Another creative breakthrough for Moon Taxi, “Say” arose from a spur-of-the-moment session with Drew Fulk, an L.A.-based songwriter/producer who’s worked with countless bands in the metal/post-hardcore world. Taking a cue from the more brooding offerings in Fulk’s catalog, the band built the song around a fuzzed-out bass riff, ultimately transforming “Say” into one of Silver Dream’s most urgent and kinetic tracks.
Proving the tremendous depth of their musicianship, Moon Taxi deliver a hypnotic piece of soul-pop on “One Step Away.” “I started writing that one in the airport on the way to L.A.,” Thomson recalls. “It ended up becoming more of a vibe than a story, this sort of desperation cry about being one step away from falling off the edge.” In part inspired by the dramatic California landscape and the retro sensibilities of Quentin Tarantino, “One Step Away” magnifies that mood with its surf-rock-leaning guitar work, jittery rhythms, and psychedelic textures.
In looking back on Silver Dream, Moon Taxi feel newly exhilarated by the possibilities in their future music-making. “Sonically it feels like everything’s been blown wide-open, and I think a lot of that has to do with letting everything happening more organically with his album,” says Terndrup. As Thomson reveals, that shift in approach goes hand-in-hand with a newfound sense of self-assurance. “Sometimes in the past we’ve held back from taking big risks with our sound, out of fear that it wouldn’t fit with who we are as a band,” he says. “But now that doesn’t faze us at all anymore. I think this album really expanded what we’re capable of, and now we have the confidence to go forward with whatever crazy ideas we might come up with.”