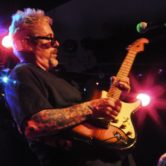 Johnny Mac’s voice emanates from a special place familiar to those who have experienced intense pain, sorrow, joy, and anger. His guitar work is masterful, powerful, and intense. True to his Southern roots, Johnny’s musical career began at the age of three while playing gospel and church hymns on the piano and listening to George Jones and Merle Haggard with his father. Beyond his Southern roots as the son of a military family, his influences expanded with his world, bringing Motown and the British invasion to his AM radio in Hawaii.