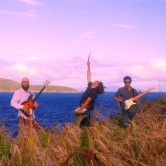 The Get Right Band

The Get Right Band – An Ass Shaking Good Time

The Get Right Band is a force to be reckoned with. Combining catchy, clever songwriting with musical expertise and fearless improvisation, the live show promises to make you shake everything you’ve got. From funk to rock n’ roll to reggae, this is a dance party. This is an ass shaking good time.

Born out of Asheville, North Carolina’s supergroup Soulgrass Rebellion, The Get Right band has been touring the East Coast and the Caribbean heavily since their inception in April, 2011. The band has rocked hard and jammed relentlessly every step of the way.

The Get Right Band’s debut CD, Shake, is being released on February 22nd. The rock n’ roll album features stripped down but creatively layered and produced performances of the band’s original tunes. From the seductive blues of “Voodoo Doll” to the dance party vibe of “Chromaticize” to the Caribbean influenced “Touch The Holy,” Shake passes through many genres while being held together by The Get Right Band’s distinctive style. The album is fun, full of energy, and should be listened to with the volume turned way up.